Home
Hamsters
PetCare
What Do They Eat
What food can hamsters eat?

As hamsters have cheek pouches, feeding time is more fun. Watching a hamster stuff his cheeks with food only to turn around and beg you for more is one of the perks to owning a hamster. They seem to have mastered begging for food right down to the t. It takes a lot of self control to stop myself from giving Coco more food when he stands on his hind legs and stares up at me with cheeks twice the size of his face. Luckily for his health, I couldn’t bear the thought of him becoming obese. So this article will be about what hamsters eat, both commercial food and food you can provide as treats at home.

When thinking about a hamster’s diet, it is helpful to know a bit of the animal’s background in order to best understand what to feed a hamster. Hamsters are omnivores. This basically means that they can eat some meat and vegetable matter. There are some items of meat and vegetable foods that must never be given to a hamster and these will be covered in a different article. Hamsters spend a lot of time foraging for food and their cheek pouches are used to store food they find on their travels. It is vital that nothing sticky is given to them as they may store it in their cheeks where the food may become stuck. Wild hamsters will usually pick up foods like grains, insects, seeds, fruit and vegetables.  Domesticated hamsters have a similar diet and you will find this reflected in store bought food. 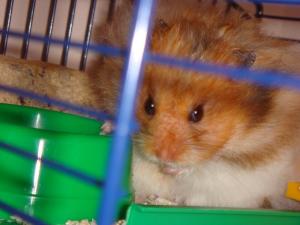 It may seems obvious, but people often ask what do hamsters eat.

Hamsters have a varied diet. In the wild, they eat things from nuts, grains to the occasional meal worm. Domesticated, you can choose the more appropriate hamster feed. There is hamster muesli (various grains and seeds mixed together) or hamster pellets (little pellets that look identical). These both provide a good base diet. I would prefer Muesli because it provides a similar diet to what wild hamsters eat.

Hamsters can also eat a small amount of fresh food, provided it is introduced slowly. Never give your hamsters too much fruit in one go. Things like a small cube of apple or carrot are good treats. But do not give too much to dwarf hamsters because they can easily develop diabetes. Most hamsters love a bit of bread, cooked pasta, plain steamed chicken and even dried mealworms.
A lot of hamster treats that you find in pet shop tend to be too sugary for hamsters. It is better off feeding some fresh food as a treat.

Muesli food is the kind where you can see each individual item, like sunflower seeds, maize, flaked peas etc. Pellet food looks the same throughout the pack. We will cover muesli food first.

Muesli feed is the usual stuff you tend to notice in pet shops. They can be eye catching and you will see some branded ones and some which are mixed by the pet shop owners. It is possible to make your own muesli feed however I do not recommend it unless you have a thorough knowledge on hamster nutritional needs or you know someone who does and can guide you.  Reason being is because if you do not know how much of each nutrient a hamster needs, you can easily create a mix which is deficient in some vitamins and minerals.

Brands that tend to be available in most pet shops are Supreme Harry Hamster, Wagg Hamster Food, Vitakraft Hamster Beauty, Beaphar Xtra Vital Hamster, Burgess Supahamster Hamster Harvest and only found in Pets at Home: Hamster Muesli. Out of the foods mentioned here, Coco only sampled the Pets at Home Muesli, Supreme Harry Hamster and Burgess Supahamster. I started off with the Pets at Home brand because that’s what he was given before I bought him. I soon realised that it was quite high in sugar with things like banana chips and that Coco did not eat most of the hard biscuit pieces, instead preferring the unhealthy sweeter stuff. I soon changed him onto Supreme Harry Hamster. Any changes of food you do should always be done over a period of ten days, where you slowly reduce the old and increase the new. This is to prevent any major upsets of the intestinal system. Harry Hamster was generally well received, especially since it had peanuts in the shell. Coco loved chewing the shells open to extract the nut.

Then one day when I was online shopping for Coco’s food and treats, I came across Burgess Supahamster which claimed that hamsters would really appreciate the protein that the mealworms in this feed offer. So I slowly moved Coco onto the Burgess feed only to be very disappointed to find he had no interest in mealworms at all. In fact he seemed to eat more of the pieces in the Harry Hamster feed so when I was near the end of the Supahamster  pack, I switched him back to Harry Hamster.

I am not saying that Harry Hamster is the best brand to give but that this was the one my hamster preferred. I do not recommend it above others neither. If you use a muesli style feed, it is very important that your hamster will eat all of the types of food in the package as the ingredients are carefully selected to provide a complete feed. I would suggest you choose a mix that your hamster preferred whilst taking into account of things like sugar levels. This is particularly important if you own a Russian Campbell’s hamster as they are susceptible to diabetes. Burgess also has a product called Dwarf Hamster Harvest, which has ingredients that are smaller so are more ideal for a dwarf hamster’s mouth. I have used this with my adopted Campbell with much success.

If you choose to give your hamster a muesli style feed, you will need to ensure that your pet eats most of the components, preferably all. To do this, you can try giving your pet a small amount of food and only adding more if all of the current food is finished. This is supposed to train your hamster to eat even his least preferred parts as he will realise his food bowl will not get topped up until he finishes everything. Hamsters can be quite sly and hideaway the foods they do not like so you will need to be aware of that too.

Now I am going to move on to the other type of food. Pellet feed looks the same as each piece has the same nutritional value. You will never have the problem of selective feeding; however it does not imitate a hamster’s natural diet. On the plus side, you will never have to worry about your hamster hiding ingredients they do not like to try and trick you into placing fresh food in the bowl. The brands I have heard of are: Supreme Science Selective, Beaphar Care+ Hamster/Dwarf Hamster Food and Pets at Home Hamster Nuggets. I have never used pellets before and I understand that the decision on whether to use muesli or pellets really lies with what your own hamster prefers. I would think that unless you have difficulties getting your hamster to eat all of his muesli, it would make sense to start with muesli. Hamsters should not have too much fresh wet vegetables or fruit due to their dry desert diet so muesli can act as a sort of boredom breaker due to each ingredient having a different look and texture.

You can give your hamster fresh foods such as fruit, vegetables and some protein foods. As they are very small, foods must be given in small amounts. Please take note of what breed your hamster is and take that into account when working out how much to give. Like all new foods, you should give a little to start with and wait a few hours to see if they have any adverse reactions before feeding more. Any uneaten food should be removed after a few hours to prevent bacterial and mould growth. The lists I provide are not complete, if in doubt, always check with an expert.

·         Cucumbers – I have heard this is ok for hamsters but never offered it because I thought the water content would be too high for a desert animal.

·         Dandelion – tried the dried stuff but it was never eaten. Dandelion root however, was accepted.

·         Peppers – not the spicy kind but the yellow/green/red ones you can add to salads. A little bit of that tends to be a good pick.

·         Romaine Lettuce – I only ever offered a little. Iceberg lettuce is a no-no as I hear that is unhealthy.

Fruits: due to sugar levels, do not give too often and definitely feed in moderation to hammies that are at risk of diabetes

·         Cranberries – one time Coco manage to get his paws into a bag of dried cranberries. He was mad about them.

·         Strawberries – Coco sometimes turned his nose up at strawberries; perhaps some of the ones I gave him were not quite sweet enough for his palate.

Meat and other products:

·         Cheese – I’ve offered my hamsters small pieces of cheddar, mozzarella and brie before without any adverse effects. This is a good provider of protein

·         Dog biscuits – Good for wearing down teeth but please make sure there are no onion or garlic ingredients.

·         Millet Spray or loose millets – A favourite with my Campbell’s hamster.

·         Rice – cooked and preferably brown. Another treat my hamster enjoyed.