Home
Animal Facts
Creepy Crawly
What Do They Eat
What Do Spiders Eat?

Often misunderstood by humans, the feeding behavior of spiders regulates almost every ecosystem on earth, principally in controlling insect populations. There are over 40,000 spider species worldwide, all of which (except one) are exclusively carnivorous. While spiders are commonly associated with webs, many species do not spin any sort of trap to catch prey, but hunt on the move instead. A spider’s environment always dictates the kind of feeding method it will employ.

What do Spiders Eat?

As we mentioned, almost all spiders are carnivorous, meaning they eat insects, other spiders, and sometimes even vertebrates. In order to catch prey, which usually can crawl quickly, jump great distances, fly, and/or defend itself with toxic substances, spiders must have certain anatomical advantages.

Most spiders have eight simple eyes, though a few families have six. The quality of vision varies by family, with jumping spiders having the most acute vision. They also have four pairs of walking legs, one pair of chelicerae (containing the fangs and venom glands), and one pair of pedipalps (which are used as an extra set of legs to aid in walking, manipulating materials, or mating).

Within the exoskeleton, spiders have muscles in their limbs, which operate via hydraulic pressure. The ends of their legs have two to three claws that help them grip surfaces. Spiders’ bodies are covered with sensitive hairs that provide important information about their surroundings. 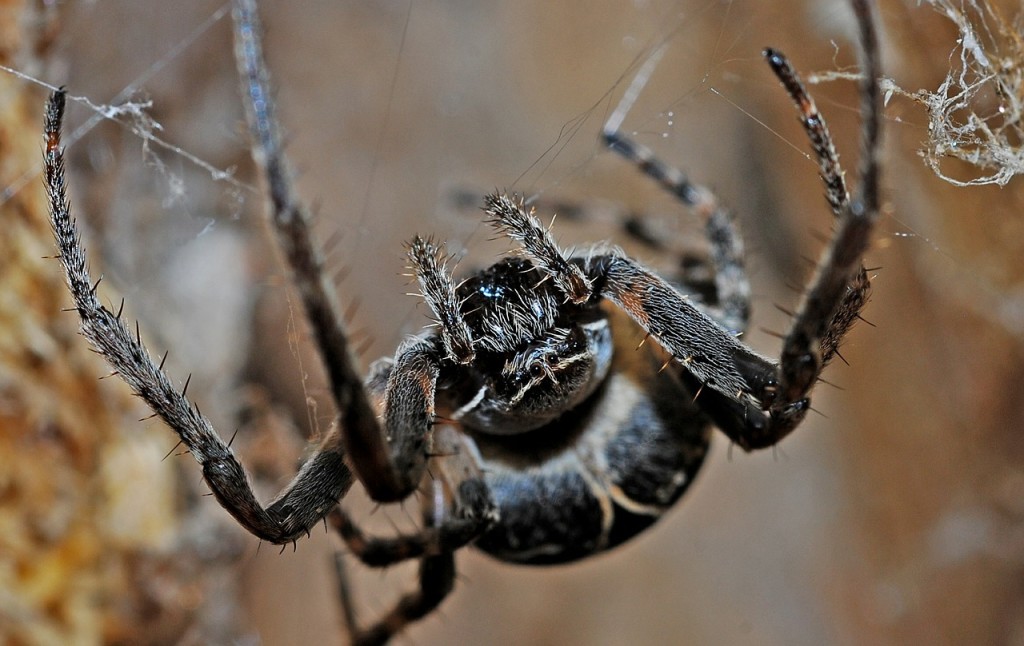 What Do Spiders Do Before Eating Their Prey?

When a spider first attacks its prey, whether in the web or on some other surface, it must deploy its fangs and inject venom into the prey’s body in order to subdue it. Depending on species, this venom will contain a combination of neurotoxins and cytotoxins, containing proteolytic enzymes, amines and amino acids. Since spiders cannot digest solids, they must convert their prey to liquid and filter out any inedible material. Called external digestion, this process can take different forms.

First, a spider uses the serrated coxa (maxillae) of its pedipalps to bite a hole in the exoskeleton of its prey. The hairy maxillae also serve as a filtering mechanism to prevent solid particles from entering the spider’s mouth. Some species, such as crab spiders, widow spiders, and jumping spiders, bite only a small hole in the cuticle of their prey and regurgitate digestive enzymes into it.

They then suck out the liquefied tissues until the prey is but a hollow shell. Other species, such as tarantulas and many orb-weavers, use cheliceral “teeth” above the fangs to grind the prey to pulp, while filling it with regurgitated enzymes. The fangs fold in on top of the teeth, and the chelicerae and the bases of the pedipalps form a pre-oral cavity to grip the food. In this case a small dark blob of cuticle (called a “bolus”) will remain when the spider finishes eating. 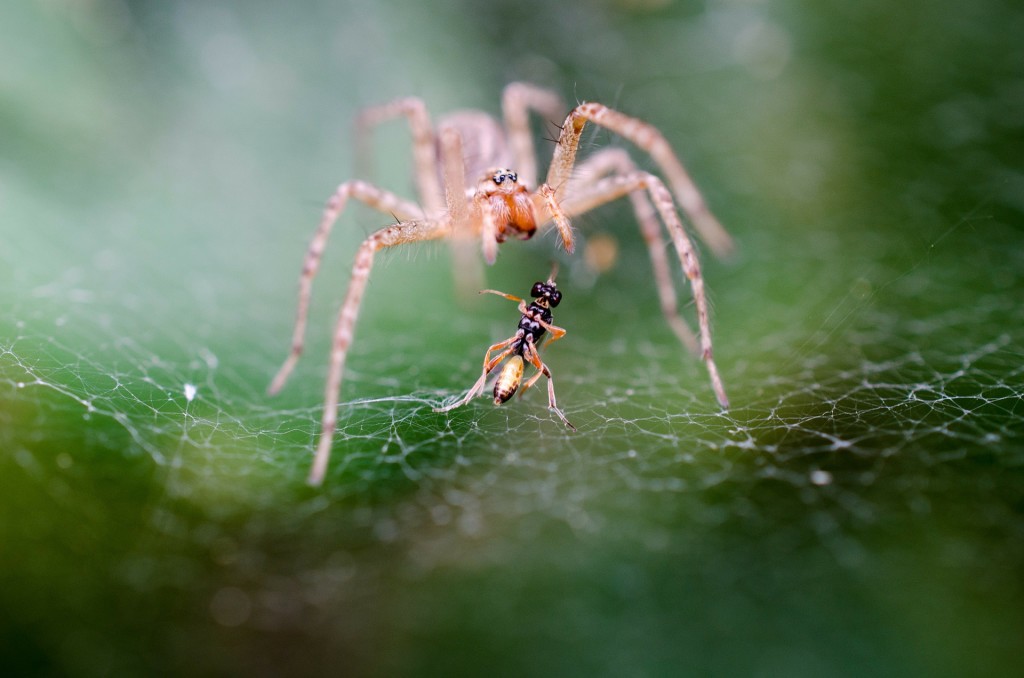 Behind the spider’s mouth, the pharynx further filters the incoming fluid. After liquid passes through the esophagus into the sucking stomach—a powerful pump—it enters the midgut. The midgut then branches out into well-developed caeca that store the digested food. The caeca can extend throughout the spider’s body, down to the coxa of the legs, up between the eyes, and around other organs such as the ovaries and silk glands, supplying them with needed nutrients. When a spider eats a good meal, its body will be filled with caecal fluids, allowing it to survive without food for many days. Unlike other arthropods, a spider’s abdomen can expand and shrink based on the amount of food it takes in.

How Do Spiders Catch Prey?

Web-building spiders (e.g. cobweb spiders and orb-weavers) rely on their sticky webs to catch prey. Depending on family, they will build a horizontal or vertical web with a specific pattern, or they will draw crisscrossing lines of silk. The spiders will lie in wait for prey in the center of the web or in a shelter, such as a leaf or clump of debris, off to the side. While the structure of the web allows spiders to crawl around without getting stuck, and traps a myriad of unsuspecting insects, such as mosquitos, flies, moths, and stinkbugs, it can be easily damaged or destroyed by birds or other large animals. Since they do not have to travel to find prey, web-building spiders have delicate legs and poor vision.

Ambush spiders spin silk, but not in a traditional web. For instance, funnel weavers usually build a horizontal web with a tube extending from it into some sheltered area. The spider will wait inside the tunnel, quickly subdue any prey that gets caught in the web, and then retreat with its meal back into its hideaway. As its name implies, the trapdoor spider constructs a hinged “trap door,” which it keeps closed until a prey insect “trips the line,” whereupon the spider emerges and attacks. Ambush spiders are more robust than traditional web-builders, and their bodies are fairly squat.

Roaming spiders (e.g. wolf spiders, fishing spiders, and jumping spiders) chase down their prey and consequently have muscular legs and good vision. They hunt both at night and during the day. If they find a good hideaway, jumping spiders will also employ ambush tactics, striking from a silken cocoon. In addition, jumping spiders often use a trial-and-error approach when they locate prey, experimenting with different strategies until they have success. 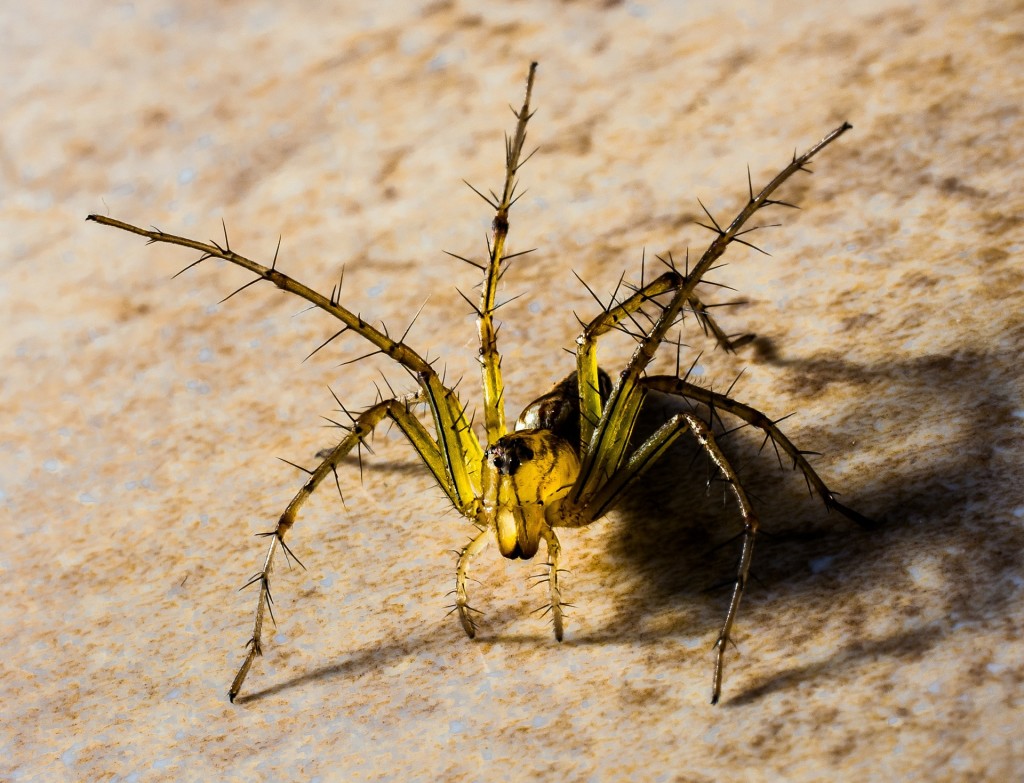 Basically, ant-mimicking spiders pretend to be ants. They “transform” themselves into ants by changing their appearance and behavior. While some spiders do this for self-preservation (ants are not high on the menu of predators), true ant-mimicking species do it to lure ants into a trap. For example, members of the genus Amyciaea act like dying ants to attract workers, which they then kill.

What Else Do Spiders Eat?

Some juvenile sac spiders and jumping spiders eat plant nectar to obtain nutrients. This is less stressful for these still developing spiders as they do not have to expend energy or risk their life as they would when engaging in carnivorous behavior. Research shows that spiders that consume nectar also have longer lifespans.

Spiders have been observed scavenging for dead insects. Females of two orb-weaver species will eat old webs, while the males will sometimes eat the web to stake their claim on a female. Like nectar, pollen can prolong a spider’s life. In captivity, spiders may consume milk, egg yolk, marmalade, bananas, or sausages.

Tarantulas, huntsman spiders, and black widows may eat an animal as large as a bird, lizard, frog, snake, or bat. Members of the species Theridion nigroannulatum form webby colonies, hunting cooperatively. There is no conclusive evidence that such communities have a division of labor (like a beehive), but the fact that these spiders share tasks is intriguing.

Lastly, the jumping spider Bagheera kiplingi represents the only species known to be herbivorous, with the Beltian bodies of acacia trees making up about 90% of their diet. Scientists believe that these spiders may have a different physiology that enables them to digest this fibrous, nitrogen-poor material. The spiders supplement their diet with the larvae of the ants inhabiting the acacias. The ants protect the Beltian bodies from other hungry animals, indirectly serving the spiders’ interests.