Home
Animal Facts
What Do They Eat
Wildlife
What Do Dolphins Eat?

Dolphins are highly intelligent marine mammals most closely related to whales and porpoises. In fact, they’re scientifically classified as “toothed whales.” Most dolphins live in the ocean, but some reside in large rivers such as the Indus, Ganges, and Amazon.

There are about 40 species of dolphin worldwide, ranging in size from the miniature Maui’s dolphin (4 ft. long, 90 lbs.) to the giant killer whale (30 ft. long, 10 tons). Their diet consists mostly of fish, squid, and crustaceans, though the killer whale will take on seals and sea lions. They engage in a variety of feeding behaviors and are even known to assist fishermen (for a tasty reward, of course).

What do Dolphins Eat and How do They Hunt?

Dolphins eat fish, squid and shrimps whenever the food are available. They generally hunt in the morning and late afternoon. To find food, these clever mammals will employ a number of sophisticated tactics that integrate their superb eyesight, hearing, and agility. They can also taste the water and use their teeth as antennae to detect objects (echolocation). 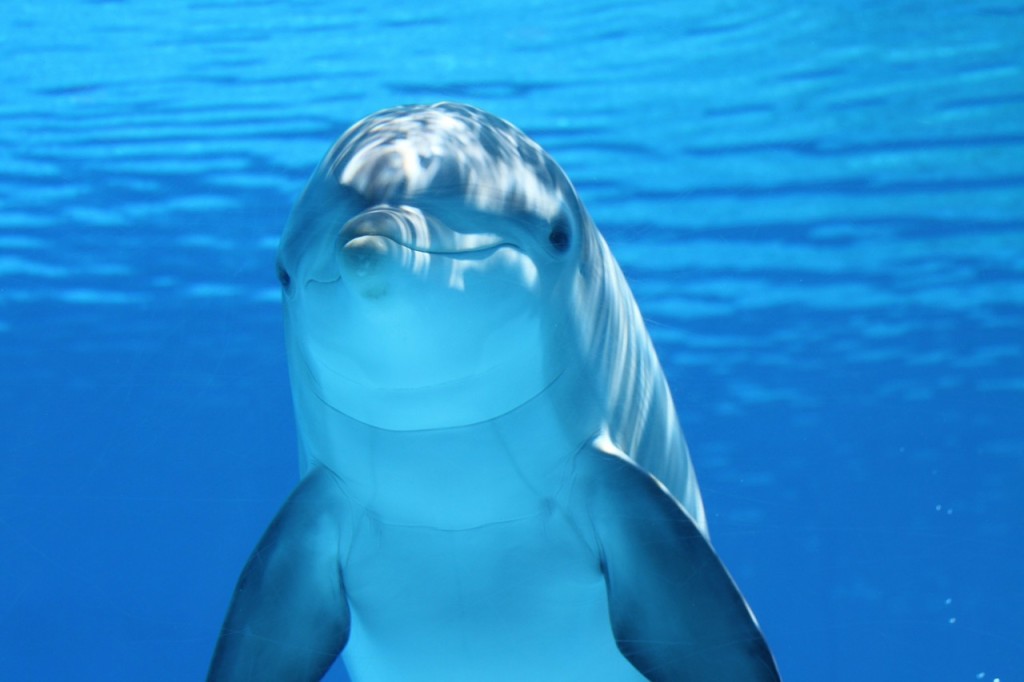 The simplest hunting method involves chase and capture. More complex methods include kerplunking, where a bottlenose dolphin slaps its flukes or pectoral fins against the water to flush fish out of seagrass beds. Killer whales and bottlenose dolphins engage in strand feeding, where they frighten fish up onto the shoreline, slide on their right side out onto the beach, eat them, and then slide back into the water.

In another method called mud plume feeding, bottlenose dolphins in the Florida Keys use their flukes to stir up muddy bottoms and disorient fish so they can’t escape. Some dolphins will chase fish into shallow water in order to catch them more easily. Others will dive to the bottom of the sea or river and dig their rostrum into the substrate like a corkscrew, forcing buried fish or crustaceans out of hiding. They may stun the fish first with echolocation clicks. 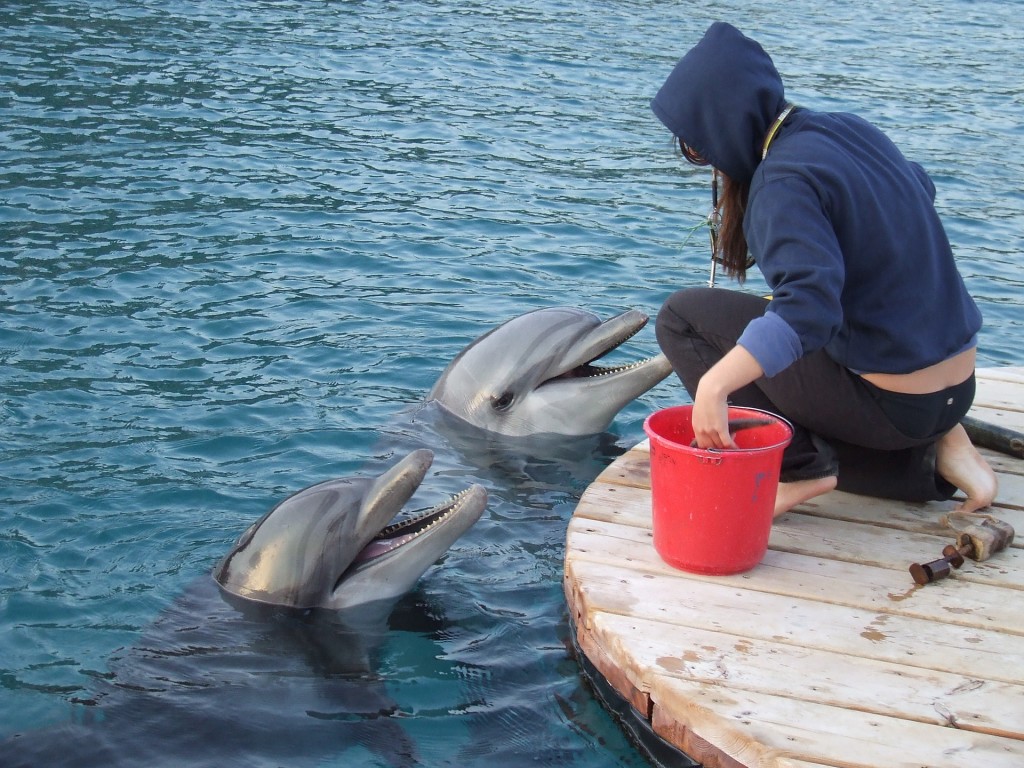 Sometimes dolphins will follow flocks of birds for an easy meal, or they may tag along with fishing boats to grab leftovers. In the latter case, they come in danger of being trapped in the nets, especially if the fishermen have used the dolphins to attract and catch tuna.

Female bottlenose dolphins in Shark Bay, Australia will cover their rostrum with sponge to protect it when foraging along rough surfaces or among spiny sea animals.

Being social animals, dolphins hunt cooperatively as well. In bait ball feeding, they encircle a school of fish, forcing it into an ever tighter concentration until it becomes a ball. Several members of the pod keep the fish in this ball, while the others take turns diving into the ball to feed. They communicate with each other to make sure they share all the tasks equally.

Due to the murky waters they live in, river dolphins use echolocation instead of sight to locate fish and crustaceans. As a result, they’re basically blind. When they do find and grab their prey, they use their powerful jaws to puncture the armored skin and crush the bones. Then they swallow the softened meal.

Dolphins have elongated jaws, which in most species form a beak called the rostrum. Freshwater dolphins, such as the South Asia river dolphin and the pink Amazon river dolphin, have longer rostra than saltwater dolphins.

Being “toothed whales,” dolphins possess teeth instead of baleen. These are arranged along the upper and lower jaws. In contrast to other mammals, whose teeth vary in size, shape, and position depending on function, a dolphin’s teeth are identical. Dolphins usually have 80-100 teeth—all conical and permanent—and use them to grip food, defend themselves, receive echolocation signals, and maintain discipline within the social group.

How do Dolphins Eat?

Like their carnivorous counterparts on land (such as lions and tigers), dolphins don’t chew their food. Their elastic esophagus enables them to devour their prey whole, and they do so head first to avoid injury from the scales of fish or the opercula of gastropods. While both oceanic and river dolphins obtain water from their food, oceanic dolphins must force the salt water from their mouths before swallowing. Adult dolphins typically consume 15-25 lbs. of food per day. They derive energy from the fat in fish such as mackerel, herring, cod, catfish, and tuna, so they prefer fish over squid, which is low in fat. 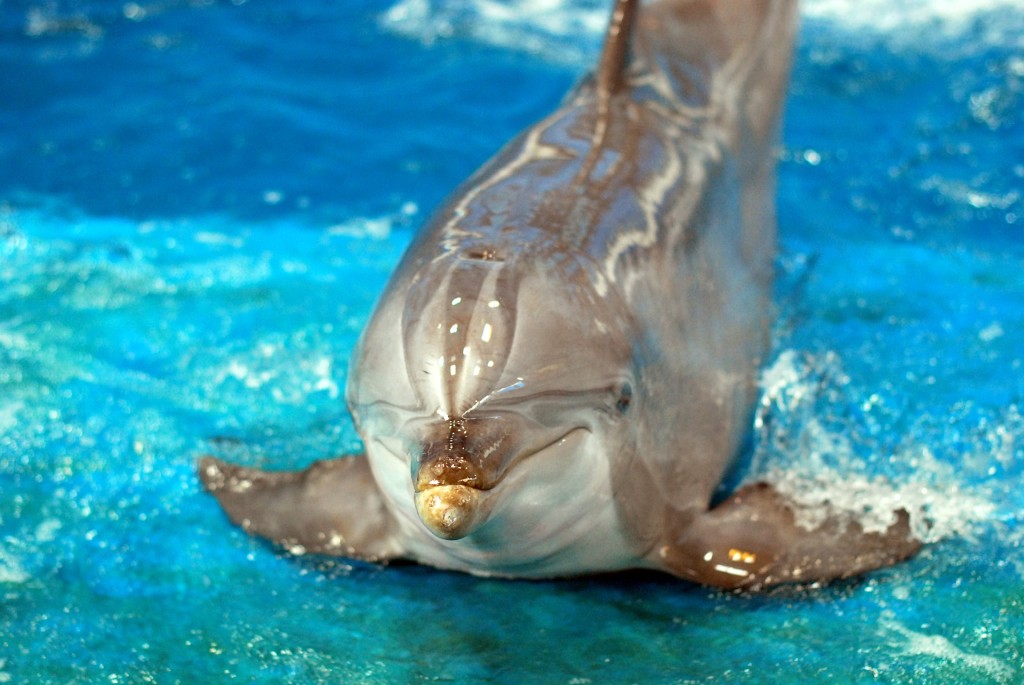 From the esophagus, food passes into a three-chambered stomach. This complex stomach differentiates dolphins from other carnivores like lions, whose stomachs have but a single chamber. In the first chamber, food is broken up, and in the second and third chambers, it is digested and nutrients are absorbed. Since the openings between chambers are narrow, dolphins cannot easily pass foreign objects.

Such an object can get stuck in a dolphin’s digestive system, causing health problems and even death. Once the food material exits the stomach, it enters a long intestinal tract that will absorb water for the dolphin to stay hydrated.