Ever remember reading the Hungry Caterpillar when you were young? It is an amazing book and every babies love it to bits. If you have never read the book, check out the reviews and the prices here . The caterpillar in the story ate and ate and ate. And finally turned into a butterfly. Caterpillars are the larval stage of butterflies and moths. They undergo a spectacular metamorphosis process from the larval stage to an adult insect by spinning a cocoon. In the storybook, the caterpillar eats apples and pears and lives a happy life.

What do caterpillars eat in the real world

In reality, caterpillars are quite notoriously known for being a pest, often destroying whole plants in both gardens and farms. One of the primary goals of a caterpillar is to feed and grow in size. They are seen to feed continuously during this stage of their life cycle. Caterpillars are mostly herbivorous in nature while a small number of them are insectivorous. They generally feed on the plant leaves. Mostly, a specific species of caterpillar will feed on a specific plant species. That is why it is important that a moth or butterfly lays its egg on the right species of plants, as the caterpillar begins to feed on the leaf immediately after its birth.

A caterpillar is specially adapted to eat a lot during their larval stage. Due to the size increase, they are able to shed their skin several times. In fact, the first thing they do when they come out of their egg is to eat it! After that, they would start to eat the leaf they are on. When they do shed their skin, they sometimes eat it to absorb the extra nutrients and to hide any evidence of their presence. Once they have the right amount of nutrients, caterpillars will use silk to spin a cocoon and enter the pupae stage where they will slowly change into a butterfly.

The caterpillar eats and eats and grows into butterfly

Caterpillars are incredibly tiny in size but can grow quite large through eating. There are hundreds of species of caterpillars all over the world, from the Arctic to the dense rain forests. It takes a caterpillar a few weeks to transforms itself from a young larva to a fully developed butterfly or moth. Unless the caterpillar in question is the arctic wooly bear moth caterpillar, who is rumoured to take 7 years to develop into a moth due to spending 90% of its life in hibernation!

What do butterflies eat

Unlike a caterpillar, the feeding habits of a butterfly are quite different. A butterfly draws nectar from flowers using their straw-like tongues which is an adaptation that was developed during the metamorphosis. The butterfly has beautiful, colourful wings and looks primarily for a mate in order to reproduce and lay eggs.

How caterpillars avoid being eaten

Due to caterpillar’s tiny size and their vulnerability they are preyed upon by many birds and insects. Even so, they have developed many defense mechanisms to enable their survival. The hairs surrounding certain species can irritate their predators. Occasionally humans picking up caterpillars will have an allergic reaction to their hair. One species is even known to make a whistling noise to scare away birds that might eat them. Some caterpillars carry venomous substance as a means of self-defense; the venom is gained by eating toxic plants and holding onto the poison. Other caterpillars have whip-like tails that are used to frighten away insects. 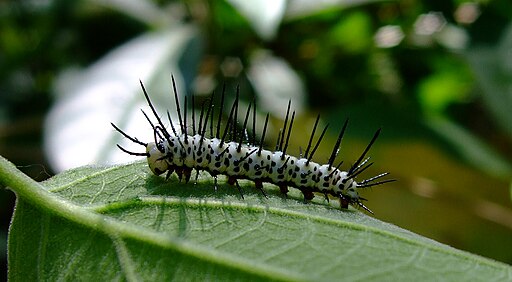 Due to the high number of different caterpillars around our world, it is difficult to talk about each and every one’s diet and adaptations that enable them to survive and go on to become butterflies or moths. Caterpillars may well be one of the most varied insects in the whole of the world.