Home
Animal Facts
What Do They Eat
Wildlife
What Do Bees Eat?

Winged insects closely related to ants and wasps, bees represent one of the most vital groups of creatures on earth. Without their inadvertent pollination during feeding and foraging, many of our beautiful flowers would not exist, which would completely alter the global environment.

Bees belong to the unranked taxon Anthophila within the superfamily Apoidea. There are 20,000 species of bees worldwide. They call home any habitat with insect-pollinated flowering plants. Bees range in size from a tiny stingless bee about 2.1 mm long (Trigona minima) to a female leaf-cutter bee about 39 mm long (Megachile pluto).

We all know that bees eat nectar. But how do they eat them? And do bees eat anything else apart from nectar? Let’s find out.

What and How Do Bees Eat?

In spite of the vast number of species, all bees share certain characteristics, such as the proboscis (tongue) that enables them to extract nectar from flowers. However, the length and structure of the proboscis (and associated mouthparts) varies by species. So-called “short-tongued” bees have proboscides 0.5-3.0 mm long; “medium-tongued” 3.5-5.5 mm long; and “long-tongued” 5.5-20 mm long.

This difference in efficiency is due to the depth of the nectaries in flowers (the glands that produce the sugary liquid bees love). Obviously a long proboscis can reach farther than a short one. Thus many short-tongued bees and honey bees (which have a medium tongue) will drill holes through a petal or prize the petals apart in order to reach the nectar. Unfortunately, in doing so, the bees bypass the pollen, so no pollination takes place. 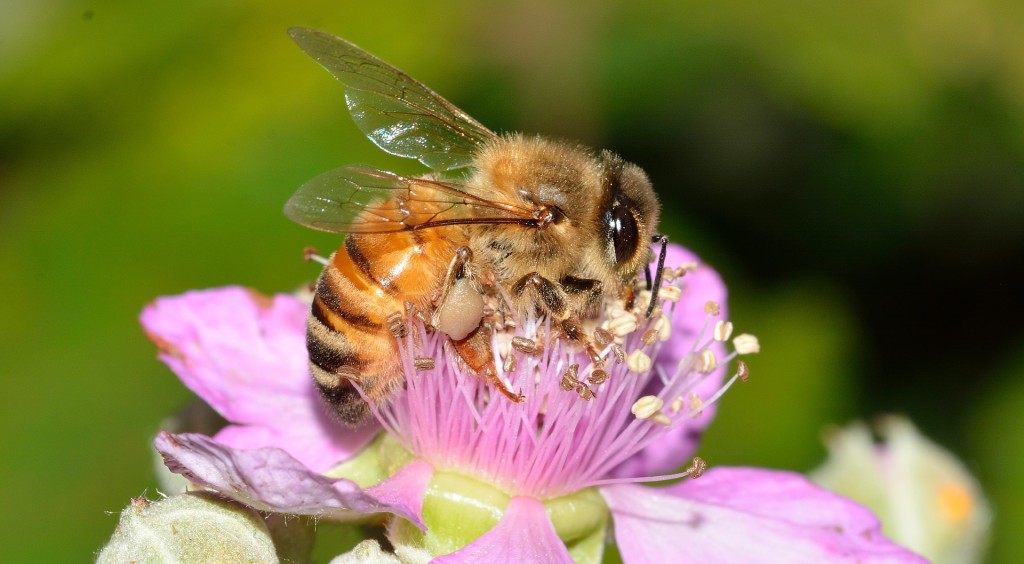 Hinged on either side of the mouth, a bee’s mandibles are strong and rigid and can be opened and closed by muscles in the head. Secretions are stored in sac-like mandibular glands and can be released at will to run down to the tip of the mandibles. Bees can use their mandibles for defensive purposes, but a primary function involves stabilizing the proboscis. In effect, the mandibles hold the tongue steady while the bee extracts nectar. Equally important is their use in the manipulation of materials, such as when building wax combs or handling pollen.

When not in use, the proboscis can be folded up into a recess called the fossa. The pharyngeal muscles in a bee’s head provide suction power. The actual tongue extends down through the proboscis and may have special features for drawing up nectar.

Unlike some other flying insects, bees’ wings move in such as a way as to allow them to hover. This way they can remain in the air, moving from flower to flower. Of course they can also land if necessary.

Although all bees feed in a similar manner, their degree of socialization determines how they will find and store food.

What are Solitary Bees? 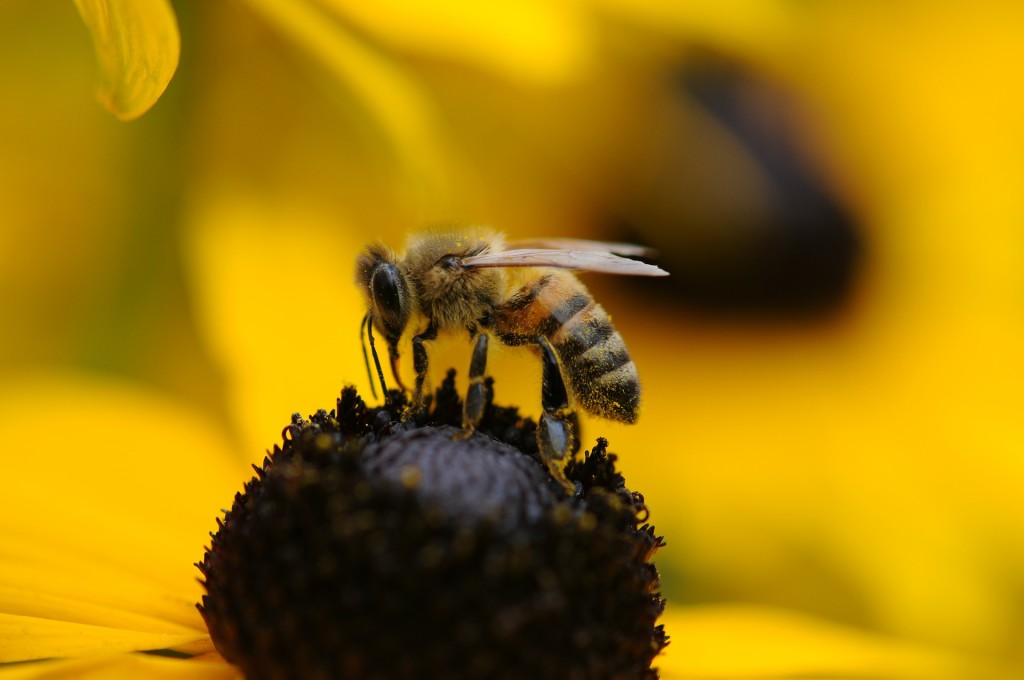 The nest consists of several cells to provide shelter and raise young. She may choose to build her nest near those of the same species in what is called an aggregation. In the spring, she forages for nectar and pollen. Once a cell has adequate food reserves (a pasty mixture of nectar and pollen), she deposits an egg.

The larva will feed on the food reserves throughout the summer, maturing until it’s ready to leave the nest and find a mate. Solitary bees do not produce honey or beeswax. Many solitary species are oligoleges. That is, they collect pollen from only a few plant species, usually in the same family or genus. Some are even monoleges, collecting pollen from only one type of plant.

What are Bee Colonies?

A colony consists of two or more adult females living in the same nest. In primitively eusocial bee colonies (e.g. most bumblebees, many sweat bees, orchid bees, and carpenter bees), a solitary female (“gyne”) builds the nest by herself, carrying out all functions including egg-laying.

Eventually her daughters assume the role of workers and she becomes the queen (no longer foraging). Such colonies are not permanent but develop out of necessity. If the queen dies and her daughters continue with the work, one of them mating and becoming the egg-layer, the colony is called semi-social. If several or all of the daughters mate and lay eggs, the colony is called quasisocial. 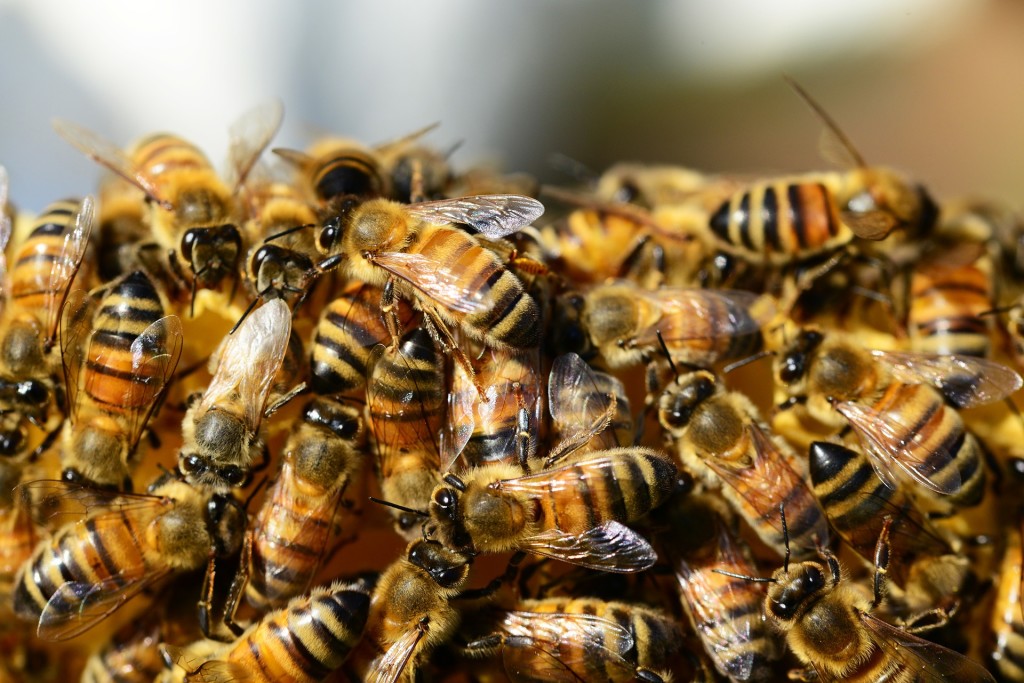 What are Eusocial Colonies?

Eusocial bee colonies (e.g. some bumblebees and sweat bees) are formed similarly to primitively eusocial ones, in that the gyne builds the nest herself and her future daughters take over the foraging tasks. These colonies consist of 50 to 200 bees and are not permanent.

In highly eusocial bee colonies (e.g. honeybees and stingless bees), a large number of workers (sexually immature females) establish the nest. There is also another caste, made up of drones (sexually mature males) that will mate with the new queen.

These colonies consist of thousands of bees, are permanent, and produce honey and beeswax. Since the colony’s nutritional demand is quite high, foragers have pollen baskets on their legs and extensions of their gut (crops) in which to store nectar. They use the orientation of the sun to find plants, and communicate the location of food via complex “dances.” Back at the nest, the bees deposit the pollen and nectar in the beeswax combs.

Honeybees feed their young directly, while stingless bees leave food inside the cell for the larva to eat. In honeybee colonies, the female larvae are all fed “royal jelly” (i.e. digested pollen and honey or nectar mixed with a chemical secretion) for the first three days; those destined to become workers are then fed pollen, while future queens are fed exclusively royal jelly.

Why Do Bees Make Honey?

In these permanent colonies, bees rely on honey reserves to help them survive the winter when they cannot forage. To produce honey, bees use their “honey stomachs” to ingest and regurgitate the nectar a number of times until it is partially digested. They do this as a group. Once the substance has the desired quality, they store it in special honeycomb cells. The bees then fan their wings to make the water evaporate from the nectar, raising the sugar concentration and preventing fermentation.