Home
Animal Facts
Exotic
What Do They Eat
What do bearded dragons eat?
Bearded Dragons are the common name of eight species of reptiles that belong to the genus Pogona. Bearded dragons are quite easily found in the branches of the trees, rocky areas, across the occasional fence wall and sometimes lounging on the ground in Australia. They have the characteristic to slightly change their colour according to temperature or mood.

by  Tambako the Jaguar

These spectacular creatures have a triangle shaped head and spike-like beards protruding from their body, hence why they are commonly called bearded dragons. Bearded dragons are common pets and are seen as an easy reptile pet to have. However, people often underestimate the cost and the amount of care they might need to provide the right kind of environment for a dragon and it is not odd to see bearded dragons in rescue centres. The pet bearded dragon can grow up to a length of 24 inches and weigh up to 600g. They can live between 8 to 12 years so to have one for a pet requires many years of commitment. However, they are known as being a friendly creature and bonding quite easily with humans. Whilst males can be aggressive towards each other, they are unlikely to be aggressive towards their carers.

What can bearded dragons eat

These creatures are omnivorous in nature. The food habits of the bearded dragons are non-citrus fruits, green leafy vegetables and insects. Crickets are among the most favorite feed for younger bearded dragons. A young bearded dragon can eat anywhere from 20 to 60 insects (crickets) each day and they require the nutrition gained from insects more than adults might. What do bearded dragons eat in captivity? If the bearded dragon is in captivity, ensure that the insect is in the size between its eyes to ensure appropriate size. The young ones feed more on the insects to get their share of nutrition, while the older dragons have a diet that consists mostly of greens. Adult dragons do not feed on many insects as excessive feeding can make them oversized.
Some of the safe insects to feed for the beardies are:
However, certain worms like mealworms should be considered a treat rather than part of a staple diet as they are high in fat.

What vegetables do bearded dragons eat?

Plants are the most reliable source of nutrition for adult bearded dragons. Vitamin A is a main source of diet for the beardie. It is available in plenty in many of the plant sources. However, care should be taken that Vitamin A is not fed in excess as this may result in Vitamin poisoning. You can feed your pet with vegetables that are cut into small sizes. Many of the fruits could also be included in the diet. If you eat many veg yourself, you may find it easy just to leave a bit of whatever you are cutting up for your dragon. Be wary of giving too much vegetables with a high water content as this can cause runnier faeces.
Here are some vegetables and fruits that are safe for bearded dragons: 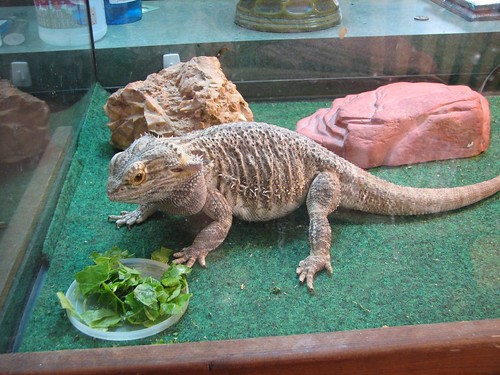 The behaviour of the bearded dragons

The behavior of this creature is quite unique when compared to many other reptiles. They communicate with their peers through body language and by changing colors of their body. They quietly wave their hand at their fellow creatures signaling a submission towards them. But, when  threatened they might inflate their beard and opens their throat to enlarge themselves as a form of defense. A quite hissing sound can also be heard to scare away its predator.
They indulge in several head bob gesture in order to communicate its intent to fellow dragons. Slow head bobbing can be seen as being a more submissive gesture whereas faster bobbing can be seen as more aggressive. If two dragons are bobbing heads at each other, this might mean territorial aggression. Males are more likely to bob their heads and when this is done towards a female, it signifies the male’s dominance over her during mating. After mating, the female bearded dragon can lay a clutch of 15 to 25 oblong shaped eggs. She will then leave the eggs alone. The eggs will hatch after a 50 to 80 day period and the sex of the babies are temperature dependent, more males with higher temperatures and more females with lower temperatures. 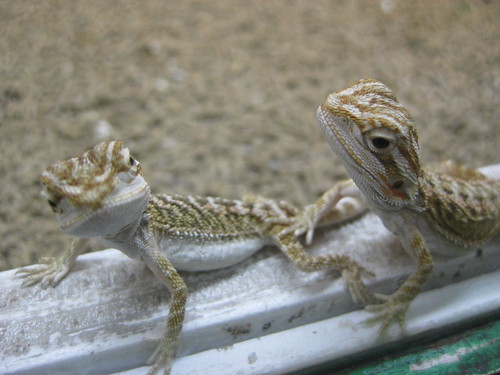