Home
What Do They Eat
What Do Bats Eat?

All bats have powerful flight muscles (especially in the thoracic region) and are skilled at making complicated maneuvers. The skin covering their wings has raised domes, containing Merkel cells, which are touch receptors found in most mammals, including humans. During a bat’s flight, air flow stimulates a tiny hair in each Merkel cell and gives the bat sensory feedback to help it fly correctly. In addition, stretch-sensitive cells in the membranous part of their wings help bats collect prey in mid-flight.

Baby bats (pups) drink milk from their mothers until they are a few weeks old (or a few months old in the case of megabats). Then they must fly and hunt on their own. Most bats are nocturnal, meaning they are active at night when insects are plentiful, predators are few, and they don’t have to compete with birds, which eat the same prey.

So, What Do Bats Eat?

70% of bats feed on insects – they are insectivores. Echolocating bats use sound to hone in on flying insects. Their large wings and small bodies allow them to fly slowly but turn in any direction. While they’re capable of catching insects in their mouth, these bats prefer to gather the insects in their wing or tail membranes (with the aid of stretch-sensitive cells). At that point, they will either store the insects in these membranes for later consumption at the roost or perch, or they will transfer them to their mouths and eat them “on the wing.” The latter method allows for more rapid consumption. A single little brown bat can eat around 600 mosquitoes in an hour.

Not all insectivorous bats rely on echolocation. Their ears are specially designed to pick up the slightest sound, such as the fluttering of wings, the sounds produced by moths, crickets, and cicadas, and the movements of centipedes, earwigs, and scorpions on the ground. When these foraging bats find an insect, they grab it with their teeth and carry it to a nearby perch to eat it.

Sometimes the insects fight back. For instance, pallid bats usually have scars on their wings from the bites and stings used by scorpions and centipedes to defend themselves. Also, some tiger moths emit ultrasonic sounds to warn bats that they are toxic, and others do the same thing to make themselves “invisible” to bats. In effect, the bats can hear the moths but they can’t pinpoint their location.

Some Bats are Nectar and Pollen Feeders

Like bees and butterflies, these bats have large wings in proportion to their body size, enabling them to hover above stationary flowers and eat the delicious food with long tongues. Nectar-feeding bats visit plants that release pungent nectar only at night. They have long, narrow muzzles and binocular vision. Pollen-feeding bats have tongues with brushes.

Some Bats are Fruit Eaters

Most of these megabats (or “flying foxes”) have no need of echolocation, so they lack the ability. However, Egyptian rousettes do use echolocation, and they eat wild dates as well as unripe fruit and fruit damaged by insects and fungus. Other fruit bats prefer fleshy, sweet, overripe fruit. Using their broad, round faces, they pick the fruit off with their teeth and carry it back to the roost or a suitable perch. Then they crush the fruit open, eat till they’re satisfied, and discard the remainder on the ground. Epaulette fruit bats can consume up to three times their body weight in figs every night. 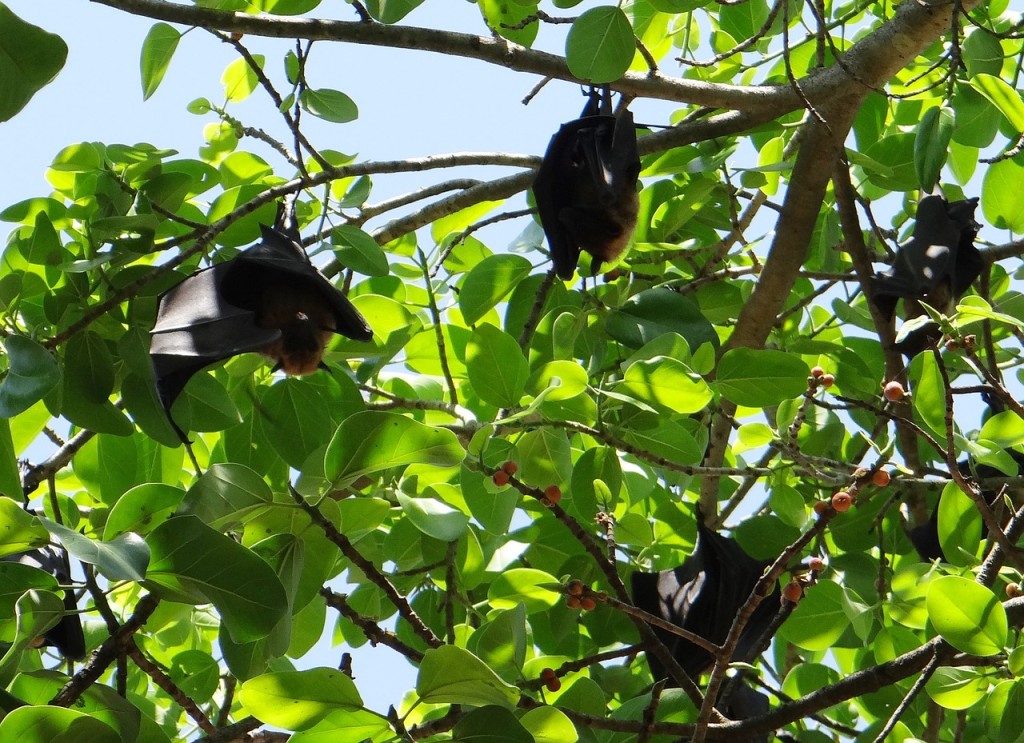 What do Carnivores Bats Eat?

Carnivores bats mostly eat small animals like frogs, mice, fish and sometimes, birds. Frog-eating bats hang from branches above water and listen for croaks or other sounds. They reportedly can distinguish between poisonous and edible frogs, and use the frogs’ mating calls to their advantage. Rodent-eating bats hunt mice and small rats, even chasing them along the ground. Fisherman bats, also known as bulldog bats, have large feet with long toes and sharp claws. They fly over the water listening for ripples and then, like an owl or an eagle, they drop their feet into the water and trawl for the fish. Unique among bats, the greater noctule bat will hunt birds in the open air, using its large wingspan and high-frequency echolocation to catch its prey during the latter’s nocturnal migration. All other bird-eating bats attack roosting birds.

Some Bats are Cannibals

Some bats eat their own kind, but only because they aren’t able to obtain nutrients elsewhere. Cannibalism is never a preference in the animal world; it’s simply a necessity. The ghost bat is known to feed on other bats in addition to small mice, birds, legless lizards, geckos, and snakes. The greater false vampire bat may also eat small bats.

Not All Bats are Blood Suckers

Found in the neotropics, vampire bats must drink blood to survive. They often return to foraging areas where they’ve had success. Since many creatures are asleep at night, vampire bats listen for the unmistakable steady breathing of sleeping animals. On locating their prey, they land nearby and “walk” towards the animal. They use the infrared sensors on their noses to locate a vein near the surface. They then use their canine and cheek teeth to shave off any fur from their prey before biting down with their sharp incisors. Contrary to popular belief, these bites don’t hurt and rarely infect the prey with any disease. The bats’ saliva contains compounds such as anticoagulants that keep the blood flowing while they lap it up. Of the three species, the common vampire bat sucks the blood of mammals, while the hairy-legged and the white-winged species feed only on birds.

Due to the rich nutritional value of blood, vampire bats can feed on a single prey animal per night. At each feeding, a female vampire bat consumes over half her body weight in blood. Her digestive system processes the blood quickly so that she can fly away soon after feeding. Within about two minutes, she will begin to urinate, reducing her weight. However, to take off she will still have to crouch and propel herself upward with great exertion.

Some More Information about Bats

Bats differ from all other mammals in that they can fly, yet they are genetically similar to obviously flightless animals such as hedgehogs, horses, wolves, whales, bears, and lions. In fact, bats are still called “flitter-mice” in some languages and “flying foxes” in English. For years scientists have disagreed as to how bats evolved the ability to fly and use echolocation. They originally thought both megabats and microbats shared a common ancestor, but molecular genetics evidence suggests different lineages. They now propose two new suborders. Yinpterochiroptera includes bumblebee bats, Old World leaf-nosed bats, false vampires, megabats, horseshoe bats, and mouse-tailed bats. Yangochiroptera includes vesper bats, sac-winged bats, smoky bats, free-tailed bats, ghost-faced bats, and leaf-nosed bats (such as vampires).

There are over 1,000 species of bats in the world (making up 20% of all mammals), and these engage in a wide variety of feeding habits. They live everywhere but the polar regions and extreme deserts, and have lifespans of 20-40 years. Bats range in size from the bumblebee bat (15 cm wingspan, less than 3 g mass) to the giant golden-crowned flying fox (up to 1.7 m wingspan, up to 1.6 kg mass). 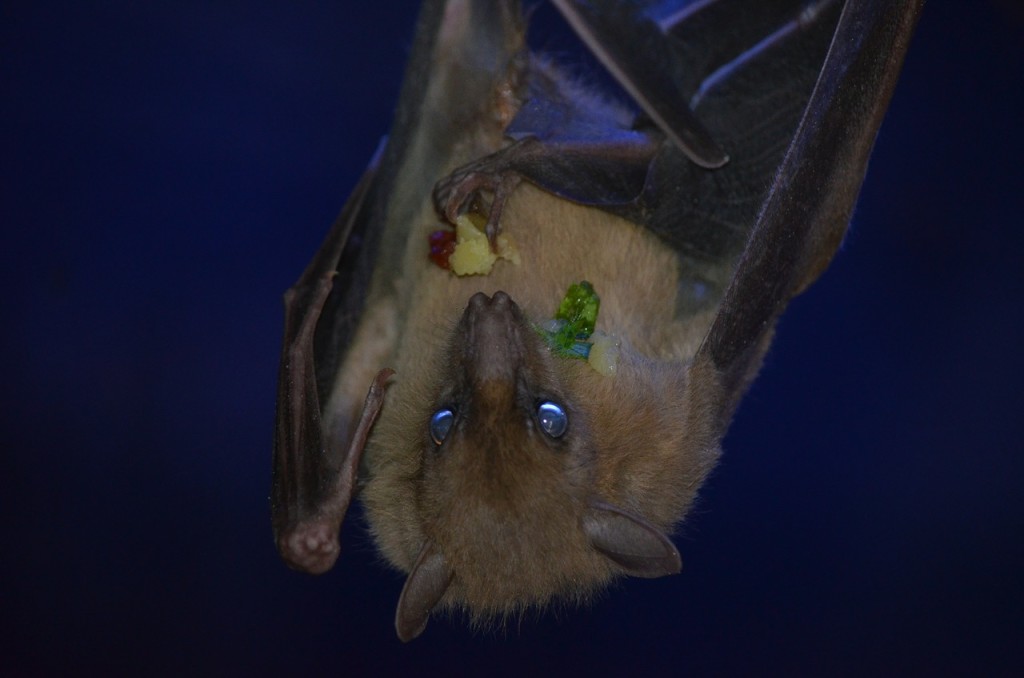 As we mentioned, the traditional division of bats into the suborders of microbats and megabats is no longer universally accepted in the scientific community. First of all, these terms are misleading: microbats aren’t necessarily small and megabats aren’t necessarily large. Instead, the main difference between them involves echolocation. Put simply, microbats use echolocation while megabats do not (except for rousettes, or “dog-faced bats”).

Microbats and rousettes use echolocation in the same way their oceanic counterparts do—by emitting sound and gathering information from the echoes—except that their system is more precise and sophisticated. Bats generate ultrasound waves in their larynx and emit them through their open mouth. While flying in search of prey, they produce calls (or “clicks”) at a low rate to conserve energy, but when they detect prey, they increase the rate of clicks until the call becomes a “terminal buzz” (a series of rapid, short, low-energy clicks). Humans usually cannot hear a bat’s calls. Echolocation calls can vary by individual, species, and environment, so observers cannot always identify species by the ultrasonic signature.

Due to their dependence on echolocation, microbats and rousettes have small, underdeveloped eyes and large pinnae (external ears) that serve as superb sound receptors. In the split second it takes for their brains to process the information from the echoes, they know an object’s size, distance, speed, and even texture. By contrast, megabats have well-developed visual cortices, resulting in prominent eyes that enable them to see in the dark.