With human expansion, many of the UK’s wildlife has suffered. However, a few species have learned to adapt to living alongside us. Red foxes are a common sight in both country and city areas. When I lived in a small town, I would see them walking around outside but they were rather shy. Now that I have moved closer to London, I have noticed an increase in bolder foxes. Just the other day I saw a family of three stare at me from a few feet away as I walked up to my home. They were unafraid of my presence. What I have yet to see much are baby foxes. Are they hidden from human eyes or have I just been very unlucky?

Baby foxes are born defenseless, with no sight, hearing or abilities to walk. These baby foxes look very different to their adult counterparts, having greyish fur rather than a rich red.They are heavily dependent on their parents at that stage. Usually, the mother will feed them milk and look after them while the father leaves the nest to search for food. A mother will give birth once a year and an average litter will have 4-6 babies. She will stay with them for 3 weeks without leaving as they are unable to regulate their temperature. She will be very defensive of her babies and if anything were to happen to the mother, the father would take care of bringing up the foxes.

At the age of 4 weeks, the baby foxes would begin to move out of their den and start eating solid foods. They would be able to walk, hear and see by then. Another two weeks later and they would be fully weaned. They will stay with their parents until they are fully independent at 6-7 months old. By 10 months of age, they would be able to go out and start their own family.

However, not all baby foxes will take the risk of moving away from their parents. Confident foxes will take the leap and leave their family unit in the hopes of gaining their own territory and breeding with other foxes. Those who are less likely to be able to do that will stay with their parents. They will be unlikely to reproduce this way and will end up helping care for their mother’s future litters. These younger foxes are like baby sitter’s for the dominant vixen (female fox). They will often care for the dominant vixen’s new litter by grooming, playing, watching and protecting the litter. 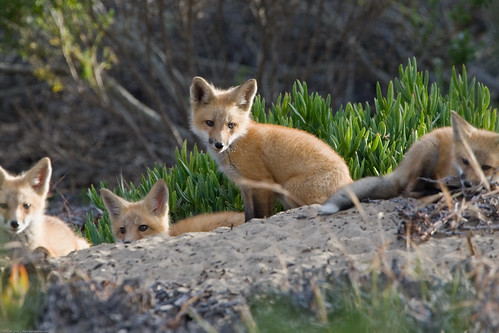 In terms of baby fox behaviour, not much differs between urban red foxes and countryside red foxes. Family units may be larger for urban foxes due to the abundance of readily available food but their behaviours and development would be the same. With urban foxes being less wary of humans, I hope to catch a glimpse of these baby foxes although that might have to wait till next year as many of this year’s babies are likely to be quite large by now!