I used to be under the impression that sharks ruled the sea. I grew up by a seafront and as a little girl; I had believed that sharks were waiting by the coast to catch any unwary swimmers. Then I found out that shark sightings just don’t occur by our coast and that not all sharks enjoyed humans for lunch. I’m not entirely sure any shark enjoys a bite of human since someone once told me they sometimes mistook humans for seals. So then I came across a piece of research the other day that made me realise sharks were not top of the food chain.

Submitted by Kempster et al. (2013), the research was about predator avoidance in shark embryos. Electroreceptors are used by sharks and it is thought that they can be used to detect and avoid predators. Some sharks develop in their mother whereas others, like the bamboo shark, develop in an egg sac without its mother’s protection. These shark embryos will develop in an egg sac and as they reach the final stages of development, the embryo moves it’s tail around within the sac to encourage fresh sea water to enter the sac and aid respiration. These tail movements might be noticed by predators, so these researchers found that if embryos that are close to hatching are exposed to predator simulated electric fields they will stop using their gills and would wrap their tail around their body.  This is a classic example of the ‘freeze’ response that many animals make use of when exposed to predators. The need to breath is strong so after a while, gill movements resumed at a slower pace. 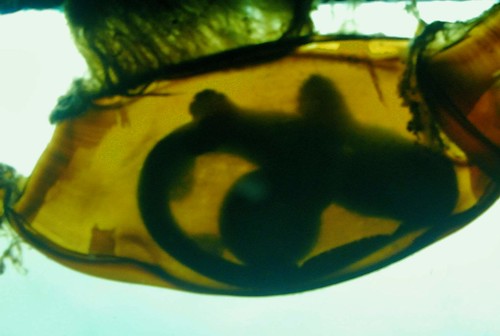 Kempster et al (2013) finish with a short statement about how these findings may be of use in creating a shark repellent device. I am not completely convinced that a device of that nature could be made to repel the sharks that pose a greater risk to humans. I’m not overly sure that predator simulated electric fields would be able to frighten away large sharks that have been known to attack humans. These kind of sharks do not have many other animals that eat them so their reactions to electric field stimuli might differ to other sharks that are preyed upon.

Finally, after a good look at the research, I wasn’t able to find out what happened to the embryos after. The eggs they used came from the brown banded shark which has a ‘near threatened’ conservation status. I hope they took good care of these eggs as it doesn’t take a lot to tip a species population count down.