Home
Exotic
PetCare
Hedgehogs as a Pet – The Prickly Truth

Getting a hedgehog as pet? No Jokes!

Ten, twenty years ago no one would have really honestly considered a hedgehog as a pet. Sure, your neighbour might have left cat food out or even a bowl of milk (a bad idea, as I will explain later) and your other neighbour might have complained about his dog getting fleas from the wild hedgehog that went around the ‘hood. But no one invited a hedgehog into their homes. My first encounter with a wild hedgehog was when I heard these weird snuffling sounds by my front garden. Peeked out the window and there she was, a brown spiky thing the size of a football. My cat was keeping his distance but observing her fast walk through the lawn. Fast? Very.

Why did people ever think that hedgehogs were slow, I wouldn’t understand. I mean, Sonic the Hedgehog runs at the speed of light! So it would make sense hedgehogs in reality were fast.

Lately, hedgehog popularity has been slowly rising since the introductory of tiny hamster sized hedgehogs. Would you like to have a hedgehog as a pet? What are they like? Read on for some insight into these prickly creatures!

The basic facts about hedgehogs as pets: 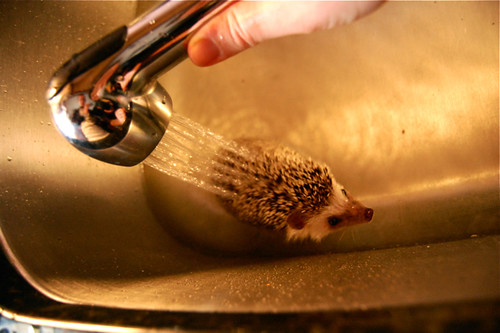 Still interested in their cute little faces? Want to know whether you should be a hedgehog owner? Come back soon, my next post will cover more about the requirements of these prickly animals, both good and bad!