Its getting warmer and sunnier so it is no surprise if you will soon hear the unique cry of baby seagulls. I live in a seafront town so we have an abundance of seagulls. Come spring, the number of babies is astounding. In particular, I am talking about herring gulls. These are the massive noisier gulls you might see. They are also famous for their aggression. Check my other posts out if you have found a baby seagull and not sure what to do, or check out the baby seagull FAQ.

These seagulls have complex behaviours and are clever birds that like to hang around in large groups. Vocal sounds and body language are very important in communication. They also enjoy personal space. For a bird that is seen in large groups, personal space is extremely important. The breaching of it can result in fights. Herring gulls have courtship behaviours where a female will approach a male with a call similar to a chick. If he is interested, he will reply with his own special call and regurgitate some food as an offering. Once she accepts, they will find a nest site and prepare it. This species of seagull prefer to stay together for life and are fiercely protective of any chicks they rear.  Whilst raptors prey on herring gulls, it is known that herring gulls with chicks are strong enough and bold enough to face up to a raptor after their young. 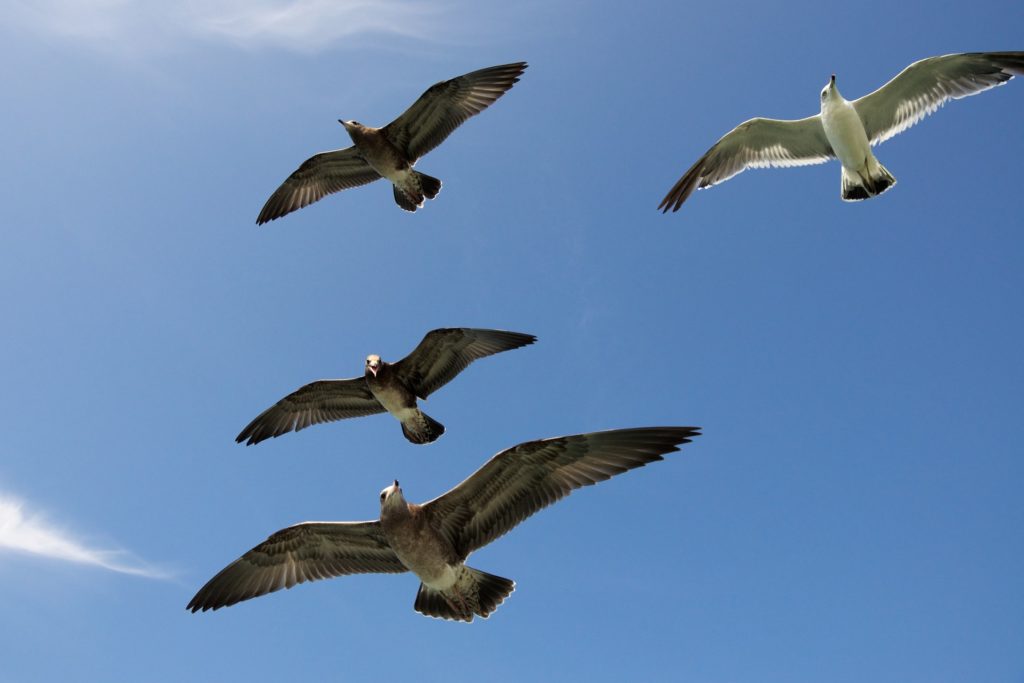 Seagull chicks are dependent on their parents for the first 3 months. By then, the fledglings would be able to feed themselves, although parents may continue to care for fledglings till they are 6 months old. If you live near a beach (or an urbanized area), you will be familiar with the call of a baby seagull, a whiny long sounds that carries far. That sound is sometimes so pitiful and needy, even I feel a desire to feed the baby! To make their parents feed them, they would tap on the red part of the parent’s beak. The parent would then regurgitate a meal for them.

Juvenile seagulls look quite different from their parents, instead of the clean white with grey wings, first year juveniles have blotchy grey, black and white feathers on their wings, brown flecks on cream up their neck and head and a black beak. Second winter juveniles have less brown flecks on their necks, the cream coming through more, a lighter grey coming through on the upper wing areas and a pinker beak. By the third winter, gulls will have a whiter head and neck with less brown streaks, a light grey wing that still retains some brown dark grey feathers, and a yellowing beak. They become full adults, able to breed at the age of four years which may seem like a long time but seagulls have long lifespans, some reaching well over thirty years in life if lucky. 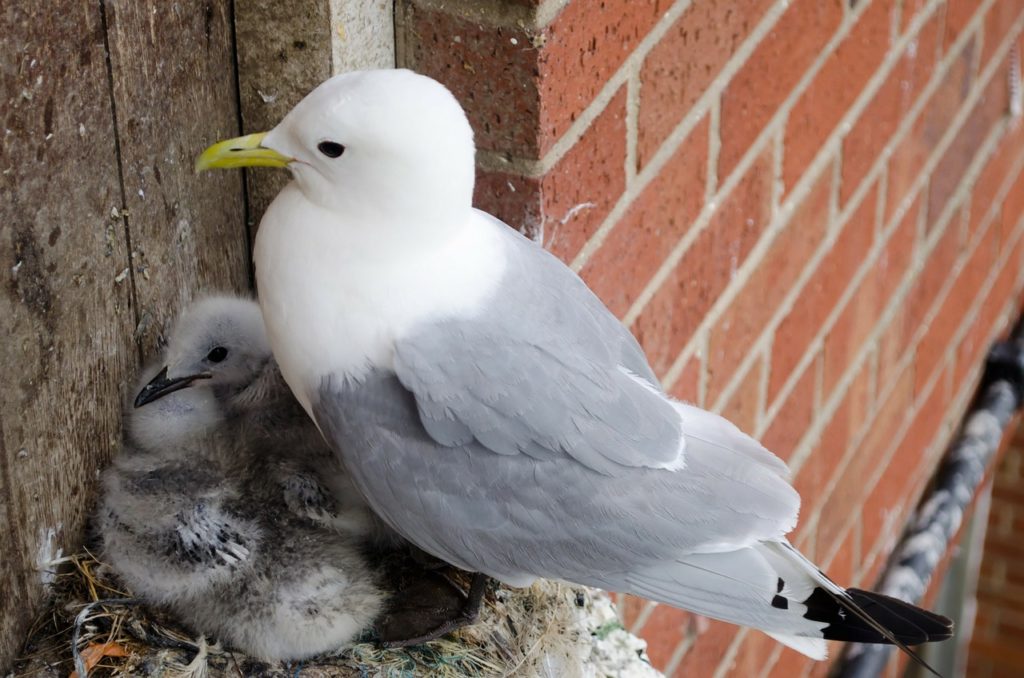 Occasionally you will see a juvenile wondering around calling its baby cry and no parent in sight. My advice is to leave it well alone and observe from a distance. Chances are it is a fledgling and it’s parent is not far away. Only after a long period of time of seeing no adults should you intervene. Due to the protective nature of parents approaching a chick or a nest can be very dangerous. Parents will make loud warning squawks and then dive at trespassers. Seagulls will attack viciously with claws and wings and will even resort to loosening their bowels and vomiting on their enemies. 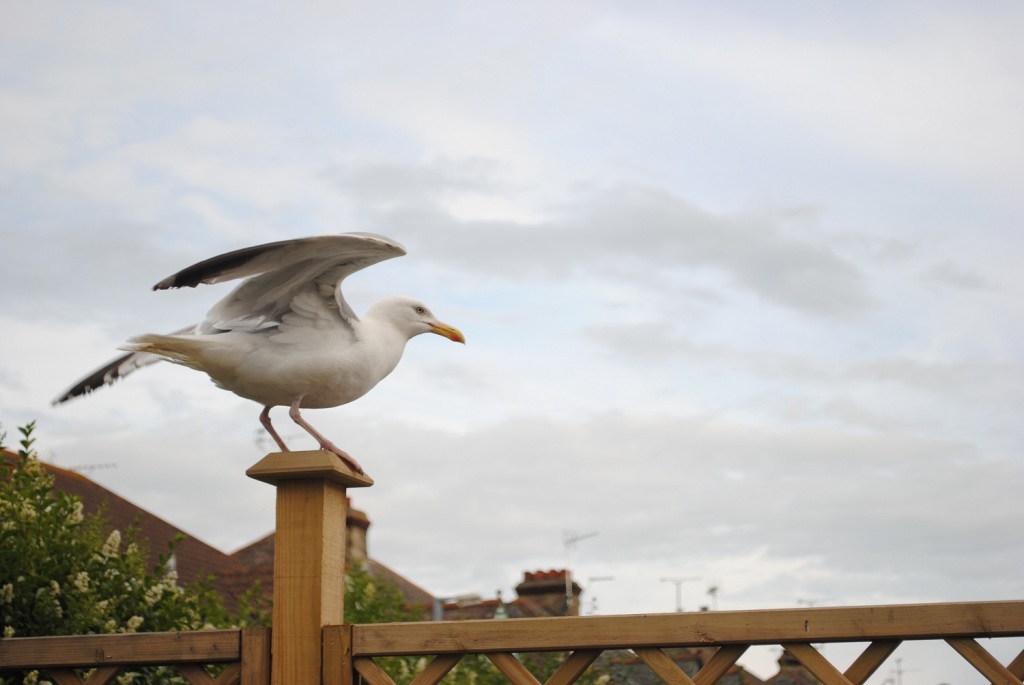 Interestingly, when they become independent, I have noticed at my local beach, juveniles prefer to hang out with other juveniles and adults prefer to be with adults. This makes some parts of the beach look like nurseries for gulls. I also realised that when people feed chips to the ‘nursery’ gulls, the adult gulls would not fly over and compete. Gull behaviour is certainly interesting and different to some of the other birds around my area. I will definitely keep an eye out for them this year.

There are many species and sub-species of gulls and sometimes it can be quite challenging to identify them. If you are interested in gulls or bird watching, I recommend this award-winning book – Gulls of Europe, Asia and North America

. It is 600 pages long and it has high-quality colourful pictures and photographs throughout the whole book. The information provided is very in-depth and it covers a lot of detail about identifying gulls. It basically tells you everything you can think of about gulls. In my opinion, this is probably the best gull book on the market.

Very important, if you want to enjoy this book fully, do not get the kindle version. This book simply not made for kindle – it turns colourful pictures into black and white which loses the whole point of having photographs. Instead, get the hardcover version and I am sure you will love it. 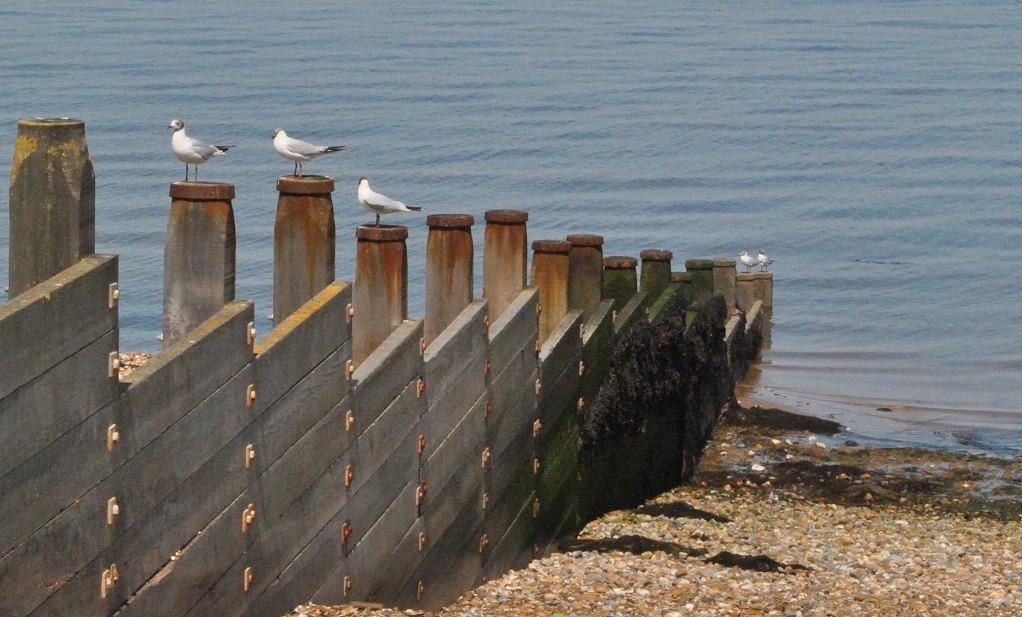 Aside from herring gulls, we have black headed gulls chilling at the beach.